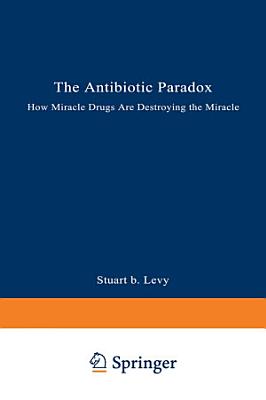 The discovery of antibiotics heralded medicine's triumph over previously fatal diseases that once destroyed entire civilizations - thus earning their reputation as miracle drugs. But today, the terrifying reality of antibiotic-resistant bacteria resulting from our widespread misuse of antibiotics forewarns us that the miracle may be coming to an end. The seemingly innocent consumer who demands antibiotics to treat nonbacterial diseases such as the common cold or plays doctor by saving old prescriptions for later use is paving the way for a future of antibiotic failure. "What harm can it do?" is a popular refrain of people worldwide as they pop another antibiotic pill. Dr. Stuart Levy - the leading international expert on hazards of antibiotic misuse - reveals how this cavalier and naive attitude about the power of antibiotics can have deadly consequences. He explains that we are presently witnessing a massive evolutionary change in bacteria. This build-up of new antibiotic-resistant bacteria in individuals and the environment worldwide is an insidious and silent process. Thus, unwittingly consumers encounter resistant bacteria in their meat, poultry, fish, and vegetables. Unregulated dispensing of antibiotics in poorer countries breeds countless more resistant strains. Since bacteria recognize no geographical boundaries, resistant forms can travel the globe. If this trend continues to grow unchecked, we may someday find that all of our antibiotics are obsolete. Today doctors can no longer expect that their first choice of antibiotic for women's urinary tract infections or children's ear infections will work. Similarly, cancer therapy is rendered useless if patients are unable to fight infections that are sometimes resistant to eight to ten different drugs. In developing countries, people are now dying of previously treatable diseases that are no longer responsive to traditional antibiotics. These problems are just a harbinger of what will come if we do not act now. Dr. Levy, recognized by The New Yorker for his superb contributions to this field, is sending out an urgent message that the world cannot afford to ignore any longer. The goal of this unprecedented investigation into the dangers of antibiotic misuse is to protect the world community from resistant infections and ensure the success of antibiotics for generations to come

Authors: Barry P. Rosen
Categories: Medical
Antibiotic resistance, once a term appreciated only by microbiologists, has become a common topic in the popular press. Stuart Levy, one of the contributors to

Authors: Ian M. Gould
Categories: Medical
The first book was on "Theory and Practice" of antibiotic stewardship in its broadest sense -the how to do it and the do's and don’ts. The second, on "Control

Authors: Scott H. Podolsky
Categories: Medical
Only by understanding the historical forces that have shaped our current situation, Podolsky argues, can we properly understand and frame our choices moving for

The Lost Language of Plants

Authors: Stephen Harrod Buhner
Categories: Science
This could be the most important book you will read this year. Around the office at Chelsea Green it is referred to as the "pharmaceutical Silent Spring." Well-

How to Overcome the Antibiotic Crisis

Authors: Marc Stadler
Categories: Medical
This volume focuses on antibiotics research, a field of topical significance for human health due to the worrying increase of nosocomial infections caused by mu

Impacts of antibiotic-resistant bacteria : Thanks to penicillin-- He will come home!

Authors: Institute of Medicine
Categories: Medical
Years of using, misusing, and overusing antibiotics and other antimicrobial drugs has led to the emergence of multidrug-resistant 'superbugs.' The IOM's Forum o