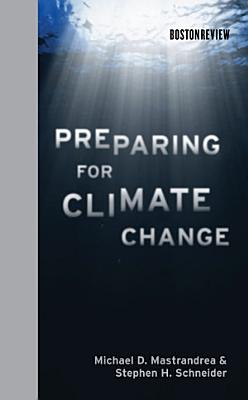 Why we should prepare for climate change now by taking anticipatory action in vulnerable regions. Global momentum is building to reduce greenhouse gas emissions. So far, so good. The less happy news is that Earth's temperatures will continue to rise for decades. And evidence shows that climbing temperatures are already having serious consequences for vulnerable people and regions through droughts, extreme weather, and melting glaciers. In this book, climate experts Michael Mastrandrea and Stephen Schneider argue that we need to start adapting to climate change, now. They write that these efforts should focus primarily on identifying the places and people most at risk and taking anticipatory action—from developing drought-resistant crops to building sea walls. The authors roundly reject the idea that reactive, unplanned adaptation will solve our problems—that species will migrate northward as climates warm, and farmers will shift to new crops and more hospitable locations. And they are highly critical of “geoengineering” schemes that are designed to cool the planet by such methods as injecting iron into oceans or exploding volcanoes. Mastrandrea and Schneider insist that smart adaptation will require a series of local and regional projects, many of them in the countries least able to pay for them and least responsible for the problem itself. Ensuring that we address the needs of these countries, while we work globally to reduce emissions over the long term, is our best chance to avert global disaster and to reduce the terrible, unfair burdens that are likely to accompany global warming.

How to Prepare for Climate Change

Authors: Anil Markandya
Categories: Science
Costing Adaptation discusses the various salient points on the costs of adaptation, with specificreference to India. It looks at the key areas of health, coasta

Preparing for the Impacts of Climate Change